About Danny O'Keefe
In 1968, O'Keefe was a member of a four-man heavy psychedelic rock band named Calliope. The group recorded one album, Steamed, for Buddah Records before disbanding.

O'Keefe is best known for the hit single, "Good Time Charlie's Got the Blues", which was released in September 1972, and reached number 9 on the U.S. Billboard Hot 100 chart, and for "The Road", covered by Jackson Browne on Running on Empty. "Good Time Charlie's Got the Blues" stayed on the Billboard chart for 14 weeks and sold a million copies. Sales culminated in a gold disc issued by the R.I.A.A. in June 1973. The song became O'Keefe's only song to reach the Australian top 100, peaking at number 53 in February 1973. 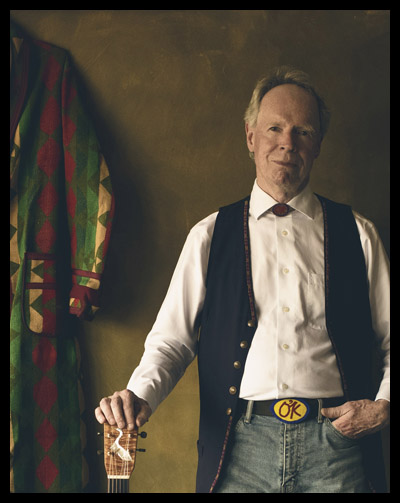 The Road
Recorded By: Jackson Browne ("Runnin' On Empty"), and Ron (a well-known Italian singer). The song is a folk classic in Italy, known by the title "Una Citta Per Cantare".

Along for the Ride  (co-written with Bill Braun)
Recorded By: John Denver (the "One World" album)

Next To You  (co-written with George Merrill)
Recorded By: Sheena Easton

Into the West  (co-written with Fred Tackett)
Recorded By: Tim O'Brien

When You Come Back Down  (co-written with Tim O'Brien)
Recorded By: Tim O'Brien; Nickel Creek

Anywhere On Earth You Are  (co-written with Tim Krekel)
Recorded By: Alan Jackson on his CD Like "Red On A Rose"

Get the lead out, mama
Pack up everything we own
The smog's about to get me
And I've got a mind to roam

In my covered wagon
Baby, down the road we'll go

In my covered wagon
Baby, down the road we'll go

Headed for the country
Can't nothin' keep me here
Feel so free and easy
Like a funky pioneer
In my covered wagon
Baby, down the road we'll go

No one gets to get into another's dreams
And all of us are a little different than we seem
The mystery engulfs me, I try to understand
What it means to be neither a woman or a man

Hey, what's so wrong wanting to be
Pretty for you, pretty for me
Be all you are, the best you can be
Shed your cocoon and set yourself free

Some caught a freight, some caught a train
Find the sunshine leave the rain
They said this town'll waste your time
Guess they're right it's wastin' mine

Some gotta win
Some gotta lose
Goodtime Charlie's Got the Blues

I am just a traveler
Angel, you're my ride
Take me past the place I passed
Last time that I died

Magdalena sits in a chair speaking of the Mass
She talks in slicing splinters, she laughs like breaking glass
She says that she would have me spirit her away
Stealing all my images, till there's nothing left to say

And if you think I'm crazy, babe
Or that I'm funnin' you
Just pay your dues and lose your blues
When she gets her tongue in you

I can be forgotten and I can be ignored
You'll find me with my poems and my songs
But if upon your journey you're returning from LA
Won't you bring that little red-haired girl along?

What will we call it now
It isn't marriage anymore
Call it new, call it different
It's not the way it was before

Call it what you want to
Darling, I'll just call it Quits

(You Look) Just Like A Girl Again
(Danny O'Keefe)

Oh, these tender moments
We hang our dreams upon
Were we ever really children
And are we now so far beyond

All My Friends
(Danny O'Keefe)

And though you are a stranger
You will always be a friend
We're travelers on a highway
We may never ride again
I often smile and wonder
What each of us will do
We might get rich and famous
End up being strangers, too

Didn't see her coming
'Til my head turned in surprise
Thinking I must know her
But it was a thin disguise
She'd padded up her innocence
And tightly cinched her fears
She left a little room, though
For Souvenirs

Oh, I still go to pieces
But I don't go as often
Those placeless times in space
Where all the edges soften
When she took me away
To where I couldn't send her
I knew she'd leave me
Something to remember

Next To You
(Danny O'Keefe / George Merrill)

There's no one who could love you more

Never Got Off The Ground
(David Mallett / Danny O'Keefe)

We all dream when we're younger
That we will do great things
Me, I used to have a hunger
To wear a pilot's wings

We've all said, "But for fortune"
Is the way it would have been
If we could take a bigger portion
We'd fill our hands again

Dig your hole in the ground
All the way down to hell
'Til there ain't no more water
In the well, well, well
When you're down on your knees
With nothin' left to sell
Try diggin' a little deeper

The river’s long, the water’s wide
The west begins on the other side
Put a skip in your step now
Dry a tear from your eye
Turn around and wave goodbye
Brave the currents of time and tide
Till you’re safe on the other side
It’s a wild dream that never rests
It calls us all into the west

The river’s long, the water’s wide
The west begins on the other side
Put a skip in your step now
Dry a tear from your eye
Turn around and wave goodbye
Brave the currents of time and tide
Till you’re safe on the other side
It’s a wild dream that never rests
It calls us all into the west

When You Come Back Down
(Tim O'Brien / Danny O'Keefe)

You got to leave me now, you got to go alone
You got to chase a dream, one thats all your own
Before it slips away
When you're flyin' high, take my heart along
I'll be the harmony to every lonely song
That you learn to play

I'll keep lookin' up, awaitin' your return
My greatest fear will be that you will crash and burn
And I won't feel your fire
I'll be the other hand that always holds the line
Connectin' in between your sweet heart and mine
I'm strung out on that wire

Your memory's the sunshine every new day brings
I know the sky is calling, angel let me help you with your wings

Sleep (Anywhere On Earth You Are)
(O'Keefe / Krekel)

And someone said, let's hang him
For he is a fool
Ah, but tell me just how was it
That he came to rule

And the president thought of Truman
When he knew the end was near
You can pass it on for quite a while
But it's true, the buck stops here

He taught his daughter to drink whiskey like water
And go for the man who had something to offer
He said to her, Baby, you can go very far
With an easy laugh and a steel guitar
A steel guitar
You don't need a man, you got a steel guitar

Make a short story longer they had a couple of children
Jack went to war and the enemy killed him
Carole got his pension and a purple heart
And every night till two she tears them apart
With her steel guitar
Says, You don't need a man with a steel guitar

She plays country music and shes paid up her dues
You ought drop in if you got nothing to lose
She can steal a guitar, steal a heart
And they come every night to get torn apart
By a steel guitar
She's got a Sho-Bud Special, it's a steel guitar

Sittin' by the water
Starin' at the stream
Tell me, honey, are there any
Catfish in your dreams

If you go down to the bank
So you can flash your bait
If you're lookin' for catfish, mama
You ain't got long to wait